A wise man is mightier than a strong man,
and a man of knowledge than he who has strength;
for by wise guidance you can wage your war,
and in abundance of counselors there is victory.

Edward Luttwak has an, as usual, persuasive article in the New York Times warning President Obama about the hazards of involving the United States and its allies in the Syrian mess. Luttwak's contrarian article comes at a time when there is renewed debate on whether Syria's civil war is now worthy of Western intervention because of the use of a Weapon of Mass Destruction (WMD). On 21 August, a WMD was used in an attack on a Damascus suburb, killing at least 100 people. Certainly, at time of writing, it seems undisputed that there was use in Syria of a chemical weapon - what one Obama aide said was "very little doubt". The question posed by recent events is the perennial one where an event occurs for which previous policy was not designed: so what? 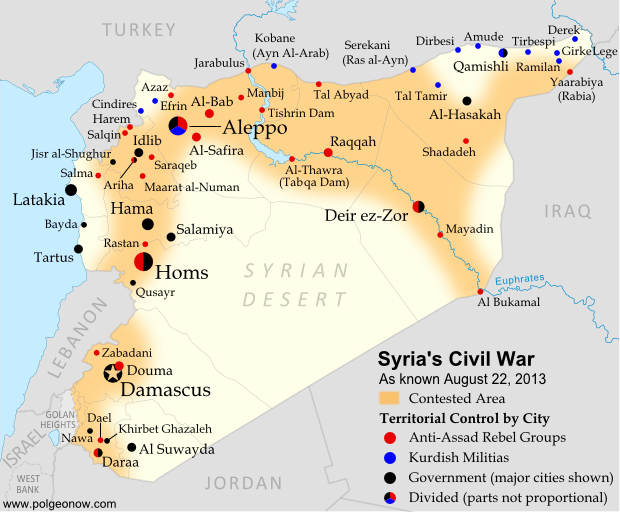 The "so what?" of Syria is the so what of the intractable, sectarian civil war between the Assad Regime (backed by Russia and Iran and assisted by Shia Iraq) and the Rebels (backed by the Saudis and the Gulf states ... and probably elements of local Al Qaeda). In short, it is a war between Syria's Alawites and their great power patrons, and the Sunni majority and their Sunni sponsors fearful of the Sunni position after defeats in Iraq, Lebanon and now possibly Syria. While the Rebels are backed by Sunnis usually found on the US side, there are enough unsavoury jihadi elements on the Sunni side to make all but the most feverish neo-conservative reluctant to intervene. However, now WMD have been used and many are screaming "something must be done".

It has long been the case, well before President Obama, that use of WMD was indeed a red line for the United States. At the time of the First Gulf War in 1990-1991, the US Secretary of State James A. Baker III warned Saddam's Iraq that any use by Saddam of WMD would invite a response of "vengeance" by the United States. It was certainly the case that WMD proliferation at the end of the Cold War was an issue that occupied the minds of all Western governments of all persuasions and at the highest levels. During the 1990s and 2000s major efforts were made to counter the proliferation of WMD and by the time of the Iraq War in 2003, stopping proliferation was a stated war aim despite the catastrophic failure to find any WMD in Iraq. The creation of the Proliferation Security Initiative in 2003 reflected the long-standing concerns of not just the United States but of many of its closest allies that WMDs be the subject of aggressive counter-proliferation efforts, particularly given the efforts of Iran and North Korea to expand the number of countries with access to WMD. Given this history and the recent rhetoric of President Obama, one would expect that something would be done. It may be that, in the next few days, through sea and air launched strikes on Syrian targets, that some of Syria's WMD stocks and facilities will be destroyed and the capacity to repeat such horrific attacks eliminated or at least reduced. There is much merit to such a series of strikes against whatever Syrian WMD targets there are that can be destroyed or damaged and it is President Obama's duty to ensure such strikes are launched swiftly, especially as intelligence on targets is likely to be perishable. However such strikes will leave Assad's regime in place and, having survived NATO strikes, it is likely that Assad will claim some propaganda victory from the rubble of whatever is destroyed in his part of Syria.

Yet, for President Obama, who won election in 2008 on ending the Iraq War and re-election in 2012 on ending the Afghan war, he can have no appetite for further adventures in the Middle East. This is especially so in terms of the humanitarian intervention being urged upon President Obama by liberals and neoconservatives such as John McCain which do not call for "boots on the ground" but do disingenuously call for a Western training of Syria's Rebel armies. Given the way that many foreign interventions start with military training teams and advisors, this should give President Obama pause for thought. For all of the rhetoric of "something must be done", Barack Obama knows full well that all of the current liberal and neo-conservative enthusiasm for intervention will count for nothing when the first NATO soldier is killed by an IED or the first NATO armoured vehicle is destroyed by an Iranian EFP. After almost 12 years of constant war in Afghanistan and Iraq, an intervention in Syria - where Iranian and Russian forces would be assisting the Assad regime to survive - would be costly in Western blood and treasure, especially given the Alawites would be fighting for their very survival against the Sunni majority Rebels. And for what objective would such an intervention be for? There is no evidence that any intervention currently contemplated would serve a serious counter-proliferation objective. All that would occur is that Western forces would, again, be hostages to fortune and, especially, to being caught in a conflict between Iranian and Saudi ambitions in the Middle East. One would have thought that one Iraq War debacle is enough without starting a sequel 10 years later.

Finally, there is the Russians. Russia has long had a port facility at Tartus on the Mediterranean coast of Syria. Russia intends to keep this facility. There may be a necessity to soon seek to check Russian ambitions but Syria is not the place and now is not the time. Russia does not agonise over events in Syria. In the last 25 years, Russia has gone from a superpower to a Weimar republic to a now resurgent continental power. Russia's facility at Tartus is not new and does not alter the balance of power. Yet any fall of Assad would call into question the status of Tartus. For Russia this may be reason enough to continue to prop up Assad. In any case, Russia's long standing patronage of Syria cannot be ignored and Russia's facilities and military personnel in Syria must be taken into account in any decision by NATO to intervene there.

In short, Syria is a mess. A sectarian mess fueled also by regional power rivalries. It is a mess best avoided unless it is absolutely necessary to get involved in. The case for NATO involvements has not been made and, given the unavoidable and unpleasant facts of the Syrian mess, no case for western intervention can realistically be made, at least not at this time. Syria is a mess. But it is not our mess.

Posted by Gray Connolly aka @GrayConnolly at 6:55 PM