A wise man is mightier than a strong man,
and a man of knowledge than he who has strength;
for by wise guidance you can wage your war,
and in abundance of counselors there is victory.


With US/Western military action against Syria now seemingly a matter of when not if, it is good to take stock as to where we are on this matter. And by “we”, I mean the Western military alliance led by the US, which stretches from the Americas to NATO, through Israel and the Gulf allies, then through increasingly India, to the US’ Asian allies such as Australia, Japan, South Korea, Singapore, Thailand, Indonesia, and New Zealand.

There are very good international order and public international law reasons for the US to strike the Assad regime insofar as such a strike is punishment for the regime’s use of weapons of mass destruction (WMD) against their own people or, indeed, against any regime that would use WMDs, at all. There is a general agreement that as weapons of war go, and as bad as war is, the use of WMDs is a threshold that is best not crossed and, if so, no use of WMDs should go unpunished. The use of nuclear, chemical, or biological, weapons, must not be excused, and none of us should want to live in a world where this sort of warfare is routine.

At the same time, there are very good reasons for avoiding any further involvement in the Syrian war and, especially, pushing for any sort of regime change in Syria. This has been my view since at least 2013.

Firstly, Syria is c18-20m people, a majority of whom are Sunni Muslim (most of a not particularly zealous kind), but who are also composed of sizeable Alawite, Druze, Christian and other minorities. The non-salafist Sunnis, as well as the minorities, still cling to the Assad regime out of both fear, and the ultimate prudential choice of Assad’s brutishness being infinitely preferable to being subjects of an Islamist regime or the next star of a jihadi beheading video. Welcome to the world of “the enemy of my enemy may be a brute but he will hopefully kill me last”. If you struggle in comprehending this sort of complexity, please do not dabble in the Middle East. Syria is the last bastion of Baathism and the sort of pan-Arab, formally secular, ideology that had once been a conventional wisdom across the Middle East, which manifested itself in similarly brutal if secular regimes in Egypt and Iraq.

Secondly, as a matter of realpolitik, the Syrian regimes of Assad senior and junior have been reliable Soviet/Russian and Iranian clients for well over 40 years. 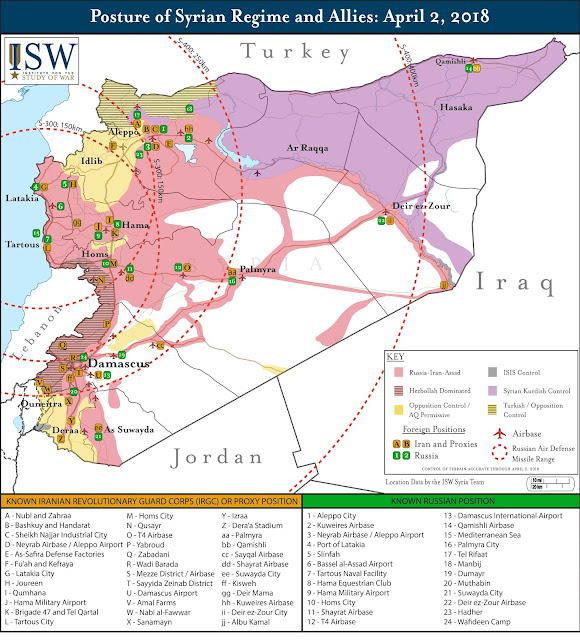 The Russians have growing bases in Syria at Tartus and Latakia, and supply arms, personnel, and even mercenaries to the Assad regime. Putin has made very clear that he supports the Syrian regime, even if he may be open to discussing the terms of an Assad family exit. It is hard to see how or why the Russians would ever surrender bases and influence in a prime Mediterranean location, as well as the venues these offer Russia to expand its intelligence collection and operational capabilities.

The Iranians, also, since at least the Iran-Iraq war, have been reliable allies of Assad and the Syrians have been loyal facilitators of Iran's ambitions, including its arming and training of Hezbollah in adjoining Lebanon, as well as helping run a Sunni jihadi ratline into western Iraq during the allied occupation of Iraq.

Any move on Syria risks entrapment in all of these inescapable foes’ schemes, especially the poking of a Russian bear. The Russians do have a quite serious domestic jihadi threat and the Putin regime has expressly linked Russia’s war in Syria to its war against other Islamist terrorist groups. It is difficult to explain to Westerners ignorant of Russian religion, history and culture, just how seriously the Russians view the threat of Islamist terrorism, which in the Russian mind, they have been fighting in one form or another for centuries.

As for Iran, if combating its influence is a goal, as it should be, then Lebanon, rather than Syria, is, on any view, a better place to do this, especially in the building up of the Lebanese armed forces and the Lebanese state so that, in due course, Hezbollah can be disarmed or at least marginalised. Those seeking to reduce Iran are looking in the wrong place for the right objective.

It has been difficult to comprehend what, precisely, is the Western interest in seeing the status quo – the Assad regime – replaced by an inevitably Sunni Islamist regime, that would have been brought to power by a jihad that has the cosmetics of a rebellion. There is no third option, no military junta, no wise council of the liberally minded to play founding fathers of a new Syria. This has not been for a lack of looking by Western Governments eager to, again, try and find a new Syrian team to support. No one advocating regime change in Syria can explain to you who or what is to replace Assad.

Indeed, the usual pattern of Western liberal interventionism has been that a brutish regime’s toppling will lead to a democracy of a sort; there will be elections, and popular involvement will confer legitimacy and a new state will emerge over time. This was the plan in Iraq, Libya and Syria. That the various national histories, geography, culture, religion, all pointed to these plans being hopelessly ill-founded was entirely irrelevant.

What is meant to happen is overtaken by what always happens: the strong man’s regime falls, there is an ineffective replacement of nice people who can speak English on CNN for a period, and then, the strongest, most brutish horse wins. To use the Iranian example, the brutish but modernising Shah is replaced by ineffectual but well meaning liberals educated in the West....and these are then toppled by murderous Mullahs (who, like the Shah, deliver bread and electricity, but also, now, turn the nation into a prison). There is no reason to believe that toppling Assad’s regime in Syria will not, similarly, see a brutish secular regime replaced by a worse regime supportive of Sunni jihadis.

Much Western commentary advocating Syrian regime change has been authored by politicians and pundits who, from Afghanistan to Iraq to Egypt to Libya, have been completely and utterly discredited by events over more than three decades and by a repeated unwillingness to recognise the unique governance problems that persist in this tribalised and sectarian region. From John McCain to Bernard-Henri Lévy to Michael Ignatieff, the coalitions of laptop bombardiers and the foreign policy “Blob” have got everything wrong about their successive targets. These errors are still debated in the West but nothing can alter the tens of thousands of lives lost and irretrievably destroyed, as well as the billions wasted, by catastrophically stupid Western interventions in the lands of the Ottomans and the Shahs.

Since well before the fall of Constantinople, what is now the greater Middle East was traumatised over centuries by conquerors and invaders, by the clash of Christian and Islamic worlds, and by the desire to control silk roads and seaways. In particular, the brutalisation of the region by the Ottomans and, also, by great power conflicts among the Ottomans, the Iranians, various Western powers and by Russian intrigue and "The Great Game", cannot be overstated. Only in the post-everything West is history considered optional. Yet, breathtakingly stupid Westerners have blundered away for the past almost 20 years and wreaked havoc in an already Hobbesian region that almost none of them can find on a map and/or have read anything about. It is, frankly, maddening.

Moreover, in a strategic situation in which Russia, China, and Iran, pose an increasingly coordinated threat in Eurasia against the West's security interests, then Syria is the worst possible place to divert scarce military and intelligence resources to mount a hopeless and, inevitably, counter-productive campaign. The Western security position is opposed if not yet threatened by a China seeking its own commercial, energy, and security domain. 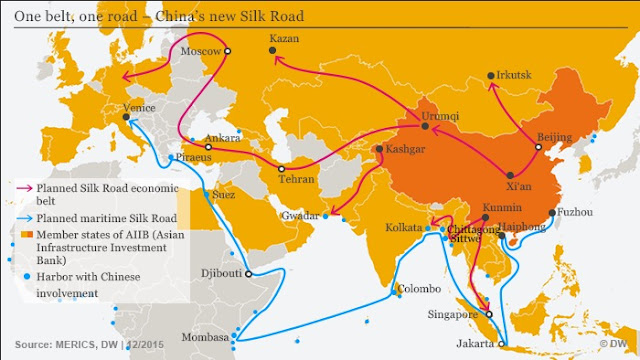 Indeed, the object of a sensible and realistic Western policy would be to note China's OBOR push and to seek to detach Russia, given China's drive to regain its natural, historic hegemony and Iran's imperial ambitions. Russia is the odd member of this anti-Western coalition. This said, before any rapprochement with Russia is possible, the Russians would have, first, to show signs of being willing to act in good faith, in substance not in form. It is hard, regardless, to see how now escalating a Western war against a Russian ally would make that rapprochement any more likely, as opposed to it likely solidifying further the current if historically unnatural rapport among Moscow, Beijing, and Tehran.

As for what comes next, one can only hope that the realistic instincts of President Donald Trump overcomes the advice he will be given by institutions and advisors who have learned nothing.

Enforcing public international law norms against the use of WMDs cannot be confused with the international social work of remaking Syria.

A strong and measured strike against Assad and his military is deserved and should be supported. But a wider campaign of regime change would be pure idiocy and should be opposed.

One can only hope that Trump has asked his more hawkish advisors what comes next after any strike? What does happen next? What, especially, is to happen, if Western military/intelligence operators or civilians are captured by Assad's forces? Has anyone sat down, calmly, and thought of the second and third order effects of escalating any war with Assad's regime, which will inevitably involve Russia and Iran?

I wrote this last April 2017 when Trump found himself at a similar crossroads with Syria and nothing has altered my view since:

However, the scope of the West's military effort in Syria should not be broadened to include that of seeking regime change or, indeed, some wider war in the Iraq and Syria areas of operations with Iran, Russia or their proxies. The West already has sufficient unfinished wars as it is without adding new fronts fighting protracted wars with the well-armed and combat-experienced forces of major military powers.

President Trump is known to be a disciple of two of America's greatest soldiers, General Douglas MacArthur and General George Patton. Both men were commanders known for achieving victories based on inspired leadership, meticulous planning, a keen appraisal of opposing forces, the relentless use of mass firepower, speed, and the remorseless concentration of forces on the weakest points of the enemy's positions. MacArthur himself has gone into history for the phrase, "In war there is no substitute for victory", uttered after MacArthur's relief as the allied commander during Truman's poorly prosecuted war in Korea.

However, less well known is that General MacArthur, in retirement, counselled presidents, prime ministers and various 'wise men' that wars that cannot be won must never be fought. MacArthur, in particular, advised his former Pacific war subordinate, President John F. Kennedy, to avoid land wars in Asia and, in particular, escalating the Vietnam war, which MacArthur judged as likely only to result in the US and its allies being bogged down in a costly quagmire that placed them at the mercy of their foes.

In the loneliness of the presidency, with all its burdens and responsibilities, and surveying the world on fire that has been bequeathed to him, President Trump could surely do worse than ask what his heroes MacArthur and Patton would make of the prospect of yet another long and unwinnable war in the Middle East? One suspects their advice would be, in every sense, laconic.

The Syrian war is a hole that we should not go down, let alone dig any deeper.

Posted by Gray Connolly aka @GrayConnolly at 7:03 PM